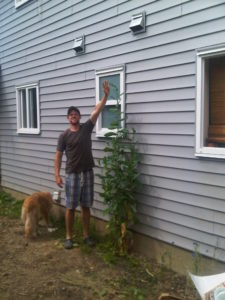 Every June without fail, our email and phones will light up with frantic messages from customers wondering what to do about their annual weed invasion. The first thing we do is calmly remind them that this happens every year, annually in fact, and to not worry too much about it. The second thing we do is remind them that weeds are actually beneficial in many ways not the least of which is their pure motives. They really are just trying to help. Weeds are opportunist plants that detect deficiencies in your soil and then work to correct those deficiencies. Sure they get a kick back but not before giving you important information first (assuming you haven’t already  shot or beheaded the messenger)… I know, your skeptical. You see a weed and your itchy trigger finger starts twitching. But hear me out first….

Let’s say your lawn has a dandelion. Its name is Richard btw. Conventional wisdom says you should behead Richard and Round-Up all his friends for a mass execution. Kinda harsh but in your defence, Richard is a known trespasser so… But what if Richard was there for a reason? Wouldn’t it be kinda rude and even irresponsible to shoot him before first hearing him out? I would think so. The good news is many people have started to listen to Richard and have started to get the message.. “Your soil is currently low in calcium and quite compacted. I recommend a future application of lime, core aeration and some topdressing would be great too. Feel free to pull me out and put grass seed back in my place. Just make sure to get all of me or I’ll be back!” I know, who knew dandelions were so eloquent? Not only is Richard eloquent he’s hellla popular. (thanks to my teenage daughter for inspiring that hip sentence) Richard has this one cutie named Buttercup who is super well connected. If you listen closely, Buttercup will tell you (in a sultry voice for some reason), “I love shady, poorly drained, compacted soil.” Buttercup isn’t as sweet as Richard but you should definitely hear her out and make the corrections. Same goes with Clover. Don’t let her daintiness fool you. She may be small but she comes in huge numbers and can overtake your lawn by the time you get back from vacation. By the way, she would tell you that your lawn needs to be top-dressed with a compost rich soil and fertilized with a natural fertilizer. Note: Harry the horsetail is tough as nails and has been around for thousands of years thus he will be impervious to any of your clever methods of eradication. Basically he’s here to stay so we suggest you get to know him. Sure, you can pull him out. But like those bad guys from the Matrix, he’ll pop up again.

Ok…now that I’ve named some of your weeds, I bet you’re feeling a bit bad. haha. Don’t beat yourself up too much, we’ve all killed Richard and friends at some point but the takeaway from this is simple.. weeds are not meant to be feared! They are meant to be named..:) and noticed, listened to and sure, once you’ve received the message, they are more than happy to be sacrificed in the name of healthy soil, but listen to them first! Healthy soil has always been their end game. And if you want a lush lawn, it must be yours! Stay away from toxic weed killers (use Weed B Gone if you just have to spray, its eco approved and we have found in our trials it works very well under strict conditions) Ultimately though, your weed problem has ALWAYS been a soil problem. So listen and act accordingly. If you’d rather not, reach out to us! We’d love to work with you. Just don’t ask us to spray.